Chandrayaan-2 sends back images of Earth. Yes, these are the real ones
India's moon spacecraft Chandrayan-2 has sent a picture of the Earth from space, the Indian Space Research Organization (ISRO) shared a picture sent by Chandrayan informing about this.
According to ISRO, Chandrayaan-2 took this picture from LI4.
ndian Space Research Organisation's (Isro) Chandrayaan-2 has sent first pictures of Earth as viewed in space.
In a series of tweets, Isro shared the Earth's pictures clicked by LI4 Camera of Chandrayaan-2's Vikram lander on August 3, 2019.
The pictures show the Earth in different hues.
"Earth as viewed by #Chandrayaan2 LI4 Camera on August 3, 2019 17:34 UT," Isro tweeted along with the pictures.
Earlier in July, Isro had said the Chandrayaan-2 spacecraft was in "good health" and moving in the "right direction".
"The Chandrayaan-2 is in good health. There is no doubt about it. It is moving in the right direction," an official of the Bengaluru-headquartered Isro said.
Isro is aiming for a soft landing of the lander (spacecraft) in the South Pole region of the moon where no country has gone so far. 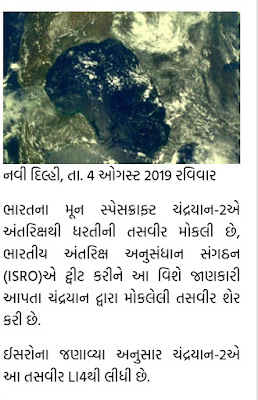